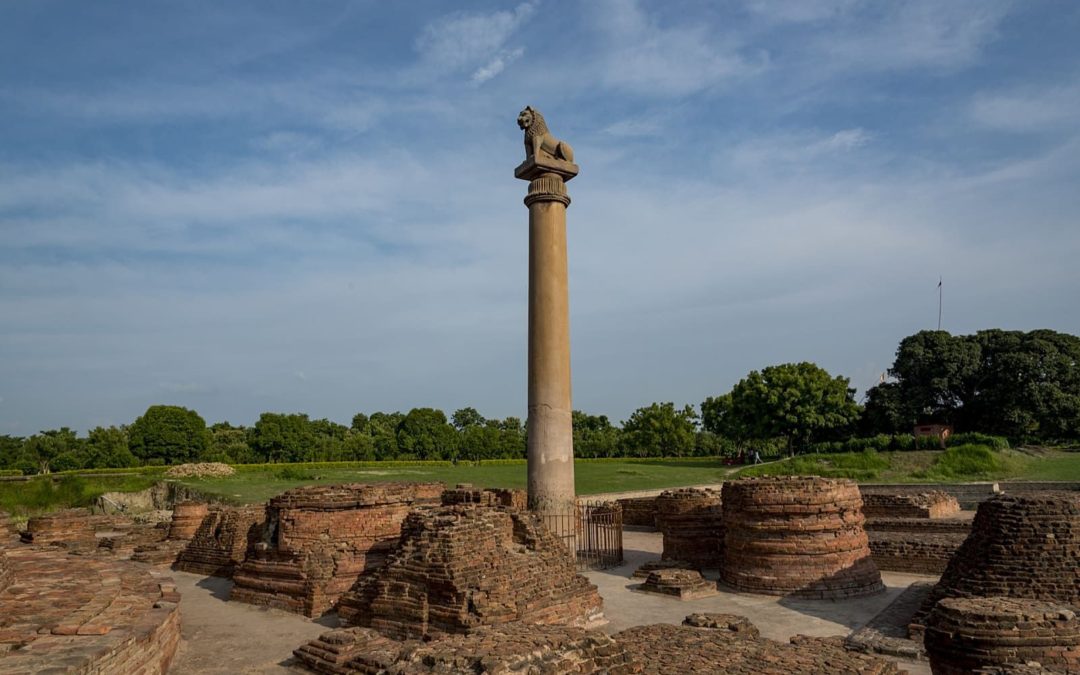 Ashoka the Great, whose heroic tales are still famous, led the construction of the pillars. He was the third emperor of the Mauryan dynasty who ruled from 268 to 232 BC.  Ashoka has covered different parts of the world. He had control over various parts of India, South Asia, parts of Afghan, and some parts of Persia.  Ashoka was a very cruel and brutal Emporer of that time but after the Kaling war his mind changed after seeing massive destruction and he decided to follow Buddhism. The national emblem of India and a mark of Emperor Ashoka’s visit to Sarnath, the Ashoka Pillar, Ashoka Stambh crafted out of stone is an impressive structure with four lions at the top.

After becoming a follower of Buddhism, he spread the principle of Buddhism all over the world. He sent his son Mahendra and daughter Sanghmitra to propagate the principles of Buddhism in various parts of the world. In just three years, he led the construction of 84000 stupas in different parts of India. He decided to build the pillars to spread knowledge about Buddhism. So, he led the construction of the pillars to the places where Lord Buddha visited. Ashoka Stambh / Pillars of Ashoka

How did the Stambh was built?

To spread the messages and share the meaning of life, Ashoka started to build the Stambh made of stone. At that time stones were used in place of woods. The rocks have migrated from Mathura and different other parts. The stones used were white and red sandstone. A pillar-shaped rock, engraved with the symbol of four lions and an inverted lotus and many other animals were drawn to that pillars.

Meaning of every symbol in the pillar.

As we know that the pillar consists of lions, lotus, elephant, horses, bull, etc. they all have a significance of their existence.

Lion: It represents the synonym of Buddha which also represents royalty and enlightenment.

Lotus: Buddha’s mother saw it in a vision.

Bull: It represents the zodiac sign of the Buddha.

Elephant: Buddha’s mother saw a white-colored elephant in her dream.

Horse: the horse represents the medium through which Buddha went to attain enlightenment.

What is the importance of lions in Ashoka Stambh?

The symbol of the lion in Buddhism is the equivalent of the word Buddha. The other equivalents to buddhas are Shakyasmiha and Narasimha. This is described in the Pali’s stories. Buddhism is a way to find the path of enlightenment. To lift oneself from the cycle of rebirth and death. 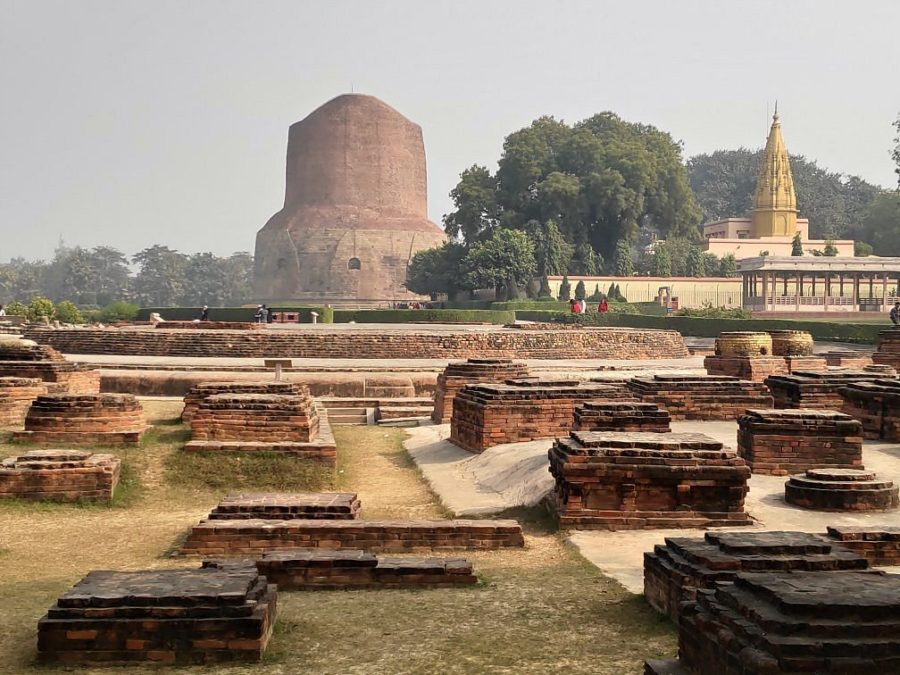 The first place we will be discussing is the Stambh of Sarnath. It was established in 250 BC by the Emporer Ashoka on the land of Sarnath. This stambh or pillar is thicker at the bottom and becomes thinner from the top. Its height is 40-50 feet and its weight is 50 tons. This pillar is made from the sandstone. The pillar consists of four lions placed at the top of the pillar, sitting adjacent showing their backs to each other. The central part of the stambh consists of the chakra which is represented in our tricolor flag.

Many tales are written on the pillars, amongst them three are more popular. One is at the time of Ashoka that is written in Brahmi script. The second one is of the Kushan period and the third belongs to the Gupta period. 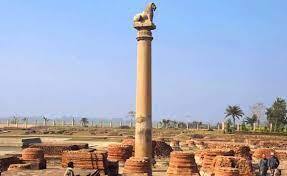 The pillar was built by Ashoka but it was later attributed by Jehangir and Samudra Gupta. This pillar is built at the main gate of the Allahbad fort. This pillar consists of a lion facing to the North. Since it’s under the control of the army it is therefore not allowed to go and see it. Only under special permission, you will be able to see the pillar. The national emblem of India and a mark of Emperor Ashoka’s visit to Sarnath, the Ashoka Pillar, Ashoka Stambh crafted out of stone is an impressive structure with four lions at the top. 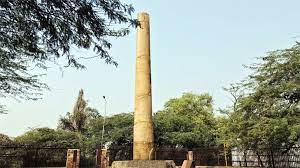 This pillar was built in the third century BC by Emporer Ashoka at Feroz Shah Kotla. This pillar is 13.1 meters in height and is made of cleaned sandstone. The pillar was firstly present in Merrut but when Feroz Shah Tuglaq visited Merrut he was so impressed by the pillar and decided to bring in Delhi and from that time it is situated in Delhi. 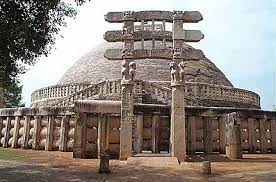 The pillars in the Sanchi look similar to the pillar of Sarnath. The pillar also has four lions having their backs adjacent to each other. This pillar is situated in Madhya Pradesh at a place known as Sanchi. This was constructed in the third century. Although it is very old still it looks new. This is inspired by greek Buddha methods.

As we know after the kaling war emperor Ashoka decided to follow Buddhism and become a disciple of Buddhism. So he built many pillars and stupas. As Vaishali was the last place visited by Buddha he decided to build a pillar in Vaishali in his memory. This pillar is quite different from the others. The pillar has one lion facing towards the east. It is believed that this is the last direction of Buddha. Near to this pillar, a small pond is present which is considered to be very holy by monks and buddha’s followers. The national emblem of India and a mark of Emperor Ashoka’s visit to Sarnath, the Ashoka Pillar, Ashoka Stambh crafted out of stone is an impressive structure with four lions at the top. 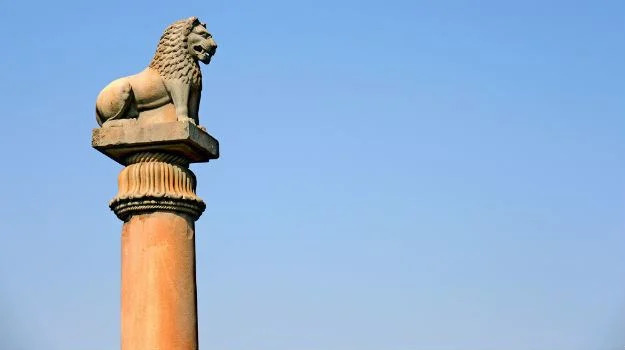 It is located in the East Champaran district of Bihar. This is mainly known for the Ashoka pillars.  Its top capital is not present.

Lauriya is located 28km northwest of bettiah. The place is named lauriya from the pillar (Laur) from the Mauryan dynasty and Nandangarh is a bank that is 2km far from the pillar. It is believed that forty pillars were built by Ashoka but at present only one pillar is present consisting of a lion at the top.

This was all about the Ashoka’s pillar. Hope this article helped you. There are many Ashokan pillars in India. Hope the article shared the appropriate information.